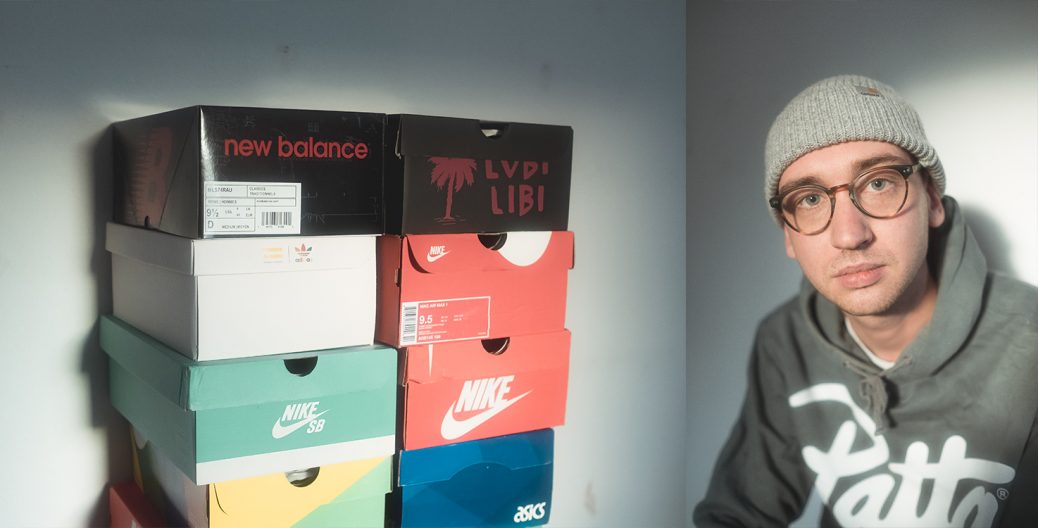 ‘’A trainer is more than just a shoe’’

Some people have more shoes in their closet than others. Wessel de Boer has them all in boxes, piled up in his room. Special sneakers for which he had to draw lots in most cases. Or you have to be the first to get them. ”I’ve been laying in front of a shop to get the latest pair.”

When you walk into his room, the tower of boxes is immediately noticeable. Filled with sneakers, safely stored away. Some have been worn, others have never seen the light of day. To him, they are much more than just objects. ‘’I don’t just see them as shoes, but as collectors’ items. I sometimes compare myself to someone who collects model trains,” he jokes. Wearing sneakers is a way for him to distinguish himself from others. ”When I walk down the street with a unique pair on my feet, I know that I won’t run into anyone else who has the same ones. That makes me feel a bit proud.”

He has 25 pairs of sneakers around him. From unique Nikes to special Vans and everything in between. Sneakers that come out in limited editions and are very sought after by fans. Wessel’s hunt mostly takes place on the internet. ‘’In the sneakerworld, it is known when certain ones are released. Then you really have to sit down and hope that you get through.” He doesn’t always manage to get hold of his gems. It’s a pity, but it’s part of the game. It keeps him hungry.

Wessel is not so concerned with where his gems come from. How they are made. ‘’Of course, I would prefer my trainers to be produced sustainably, but unfortunately that does not happen yet. The first step is taken by the producer. They make them. I would even be willing to pay a bit more for them”. He therefore sees a second aspect of the interaction between supply and demand, between consumer and producer. The trainer brands create a hype by not releasing them in large numbers and by coming up with special variants and collaborations. Because of this, you often miss out. As a huge fan, it is then difficult not to go along with it next time.”

This website uses cookies to improve your experience while you navigate through the website. Out of these cookies, the cookies that are categorized as necessary are stored on your browser as they are essential for the working of basic functionalities of the website. We also use third-party cookies that help us analyze and understand how you use this website. These cookies will be stored in your browser only with your consent. You also have the option to opt-out of these cookies. But opting out of some of these cookies may have an effect on your browsing experience.
Necessary Always Enabled
Necessary cookies are absolutely essential for the website to function properly. This category only includes cookies that ensures basic functionalities and security features of the website. These cookies do not store any personal information.
Non-necessary
Any cookies that may not be particularly necessary for the website to function and is used specifically to collect user personal data via analytics, ads, other embedded contents are termed as non-necessary cookies. It is mandatory to procure user consent prior to running these cookies on your website.
SAVE & ACCEPT